The first show this month is described in a separate post. Read it.

October 12 – The Meadows of Fall River 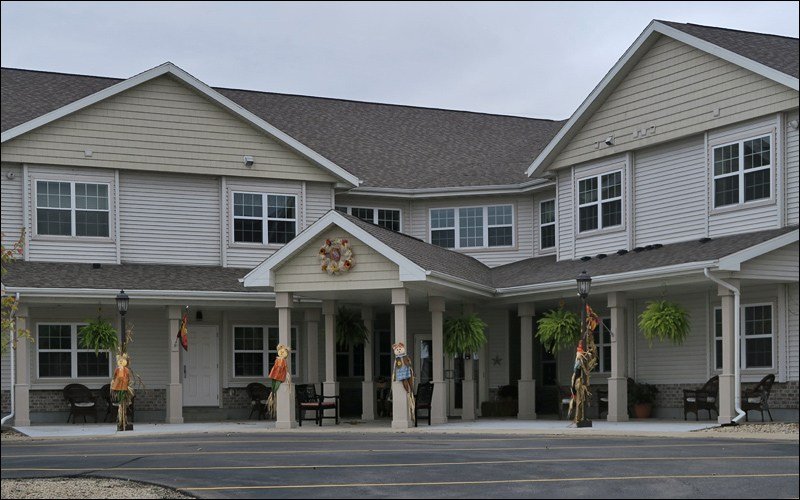 The Meadows of Fall River Entrance

To present October’s second Lights of the Lakes show, I traveled to Fall River, Wisconsin. This was my first visit to this tiny rural town near Beaver Dam. The building, decorated for fall, is shown above. 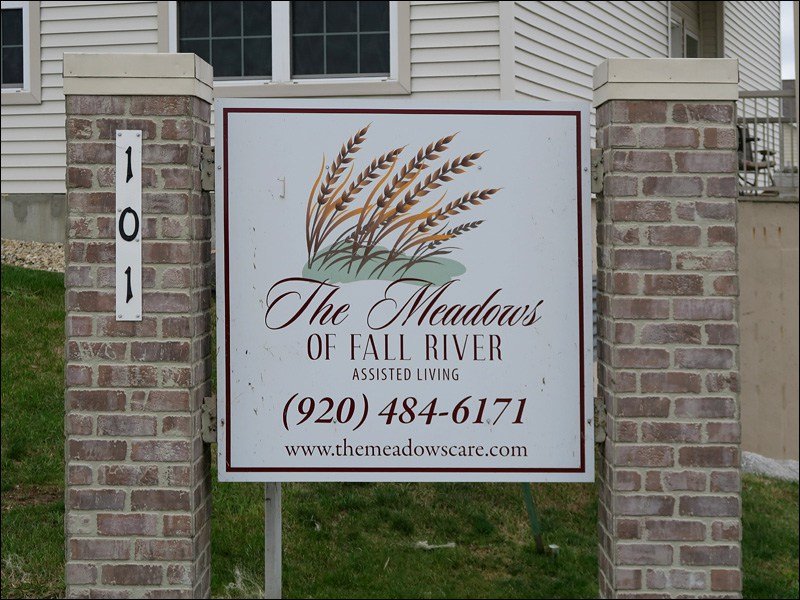 After being welcomed to this friendly and unassuming place, I set up right in the lobby near a fireplace. About a dozen seniors attended the show at The Meadows.

Charleston House, an assisted living unit of Landmark Senior Living, hosted the third Lights of the Lakes show this month. On another beautiful fall day, I traveled to Beaver Dam, WI to present there. 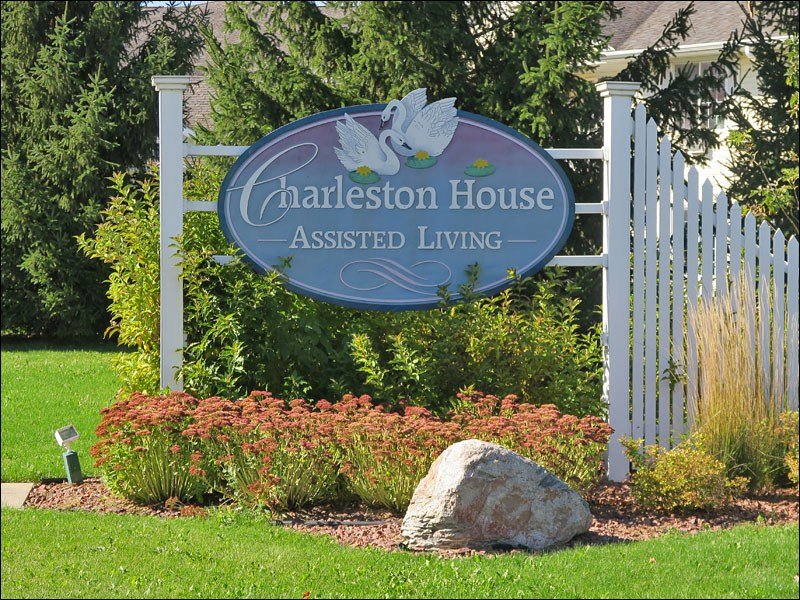 Bright sunshine and above-average temperatures made for shirtsleeves weather here in mid-October. 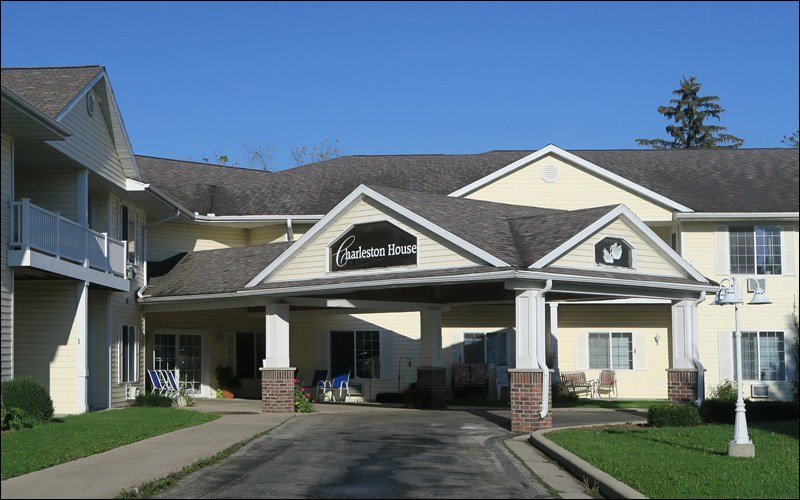 This location had a second-story balcony which allowed me to get an unusual overhead shot overlooking the Great Room where I presented the show. About fifteen seniors attended; all but one female. 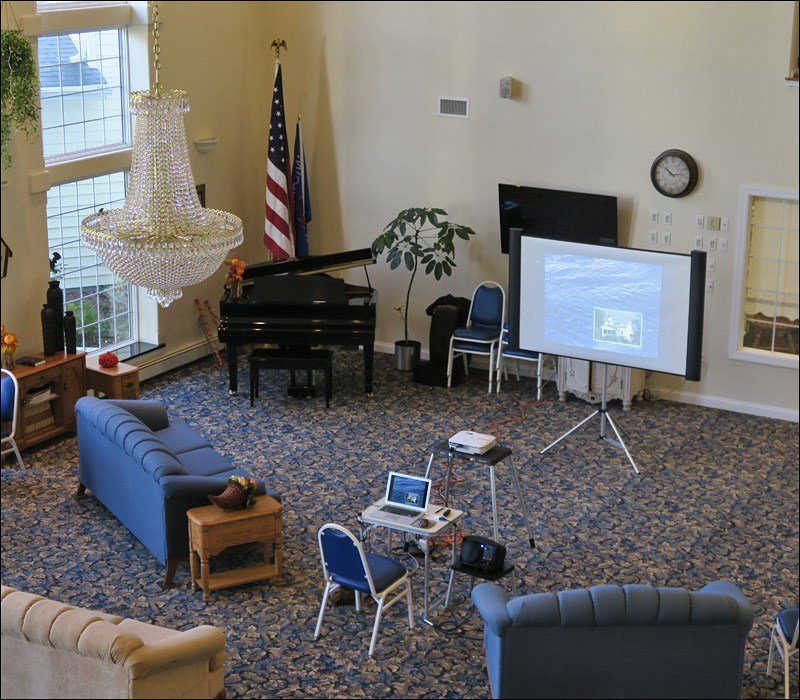 The stretch of sunny, warm mid-October days continued into mid-week. Today’s journey took me to the Fox Valley of Wisconsin to present at Touchmark on West Prospect. This building was an upscale independent-living apartment complex. 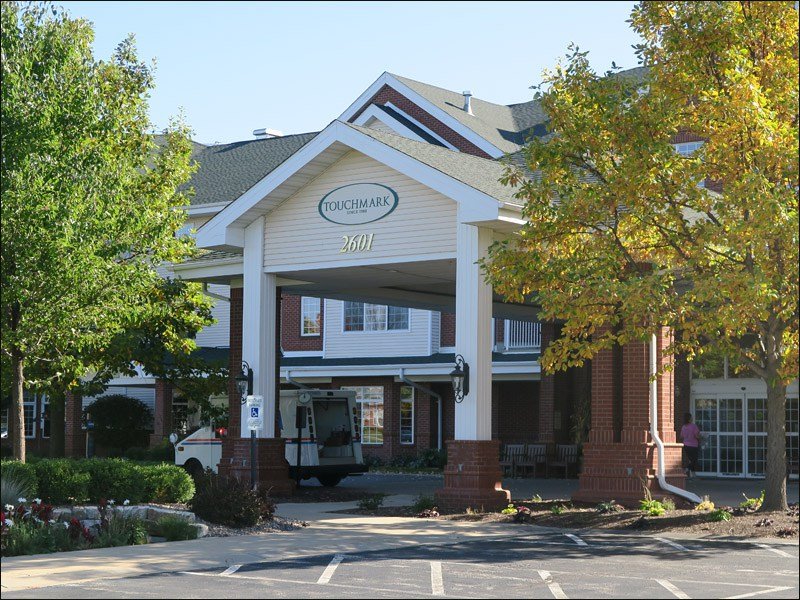 I delivered the fourth Lights of the Lakes show of the month in the Touchmark Chapel, a theater-style room that was perfect for the show. For a chapel, it was completely devoid of any religious artifacts. I was able to tap into their house media system, which included a ceiling-mounted projector, large screen, and room-filling stereo system. For the first time in memory, I didn’t need to use any of my own equipment beyond my laptop. I did have to go back out to the car to get an HDMI cable, though, in order to connect to the system.

My audience was unusual for a group of seniors—it was about two-thirds men. Normally, my senior audiences are overwhelmingly elderly women; usually in their 80s; sometimes their 90s. My contact, Kylie, was only 25. After the Edmund Fitzgerald segment at the end of the show, she told me she was born in 1992 and never knew about the shipwreck. 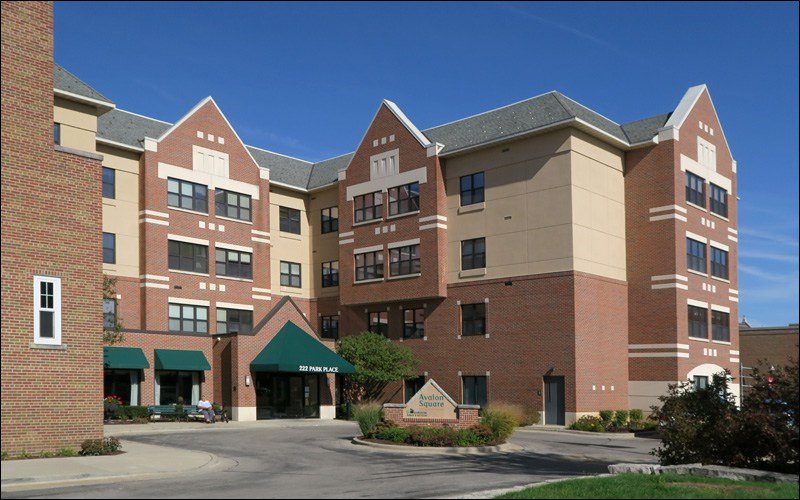 Avalon Square is a large senior residence in Waukesha, WI. It was the site of my third Lights of the Lakes show this week. The audience was very typical: about fifteen eighty-something women, and a couple of elderly men. What made this outing memorable was that the temperature was 80º on October 20th…highly unusual for Wisconsin! 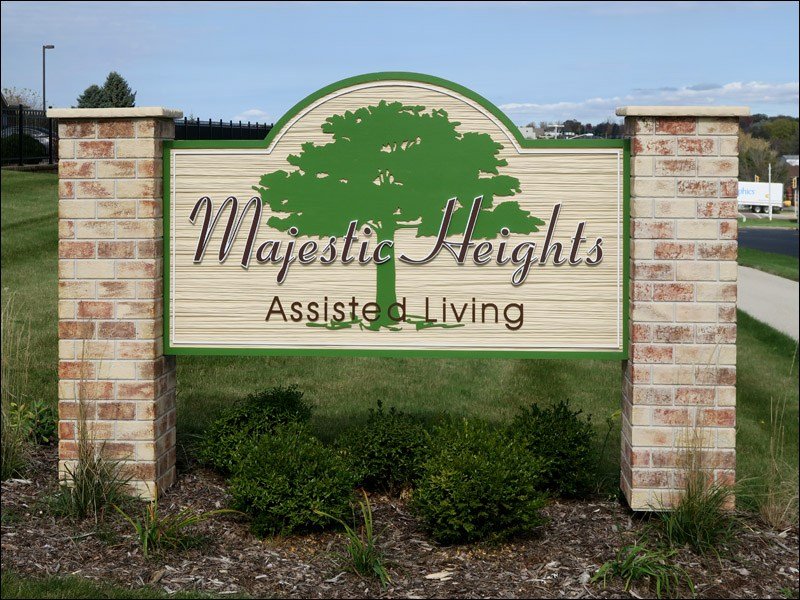 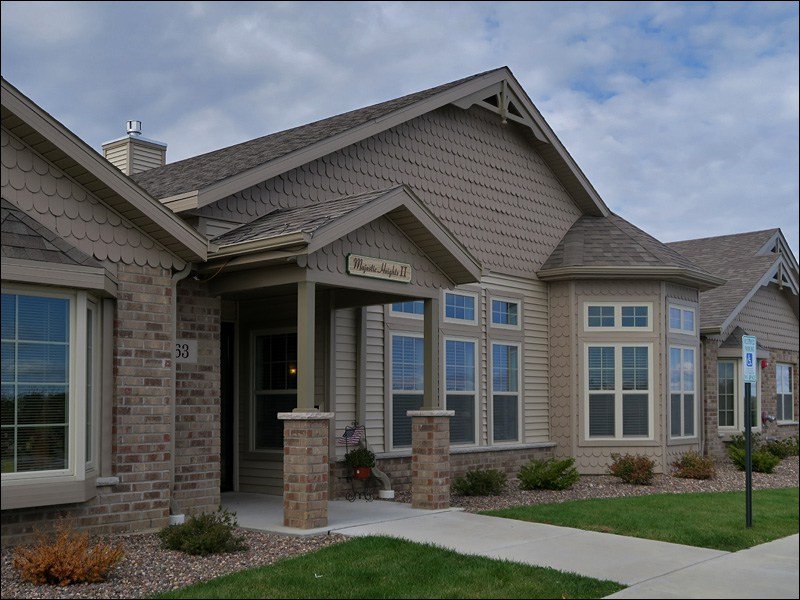 On a decidedly cooler October day, I traveled to Hartford, WI to do my next Lights of the Lakes show. The venue was Majestic Heights Assisted Living. In a building not quite a year old, I entertained a group of around 20 senior residents of the facility. 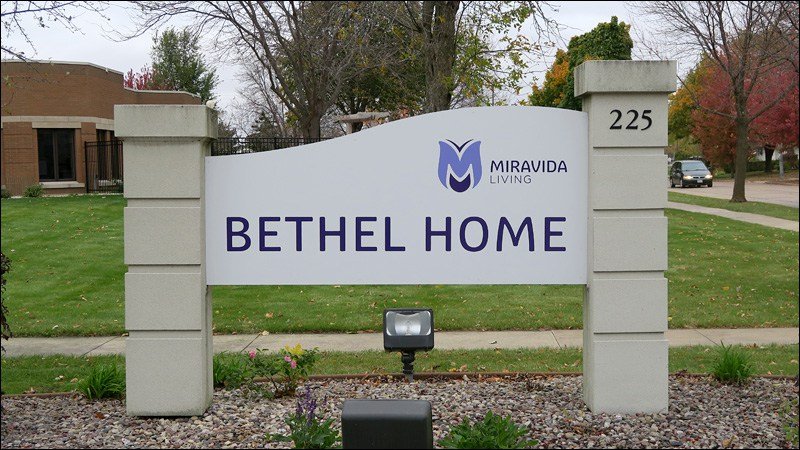 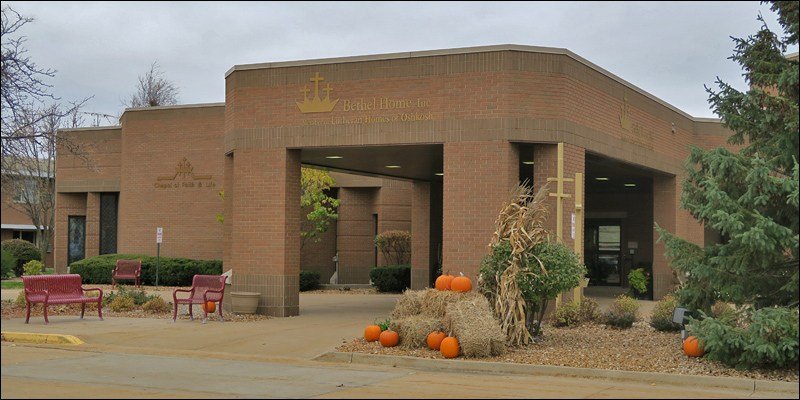 As November approached, an the weather turned decidedly chilly, I trekked to Oshkost for the last Lights of the Lakes show of October. 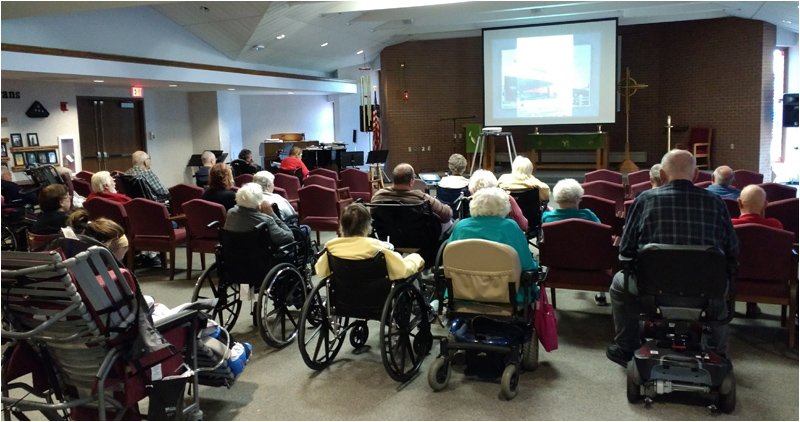 This has been another busy month for and yours truly, but more of the same is on tap for November. Check back as the year winds down for more news about my travels presenting Lights of the Lakes.

Phil Block was the keynote speaker at the Annual Membership Meeting of the Bay View (WI) Historical Society on October 2, 2017. About forty members and their leadership gathered in the 1872 Beulah Brinton House, which is their headquarters. 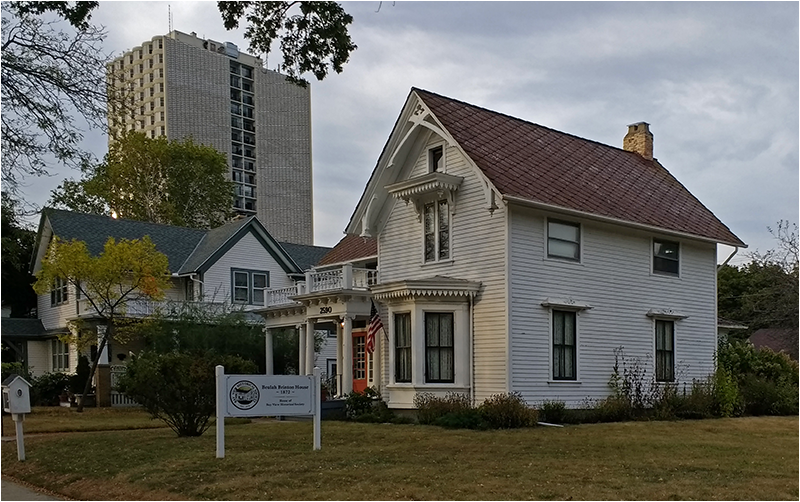 The Bay View Historical Society provided advance publicity for Lights of the Lakes, as shown below. 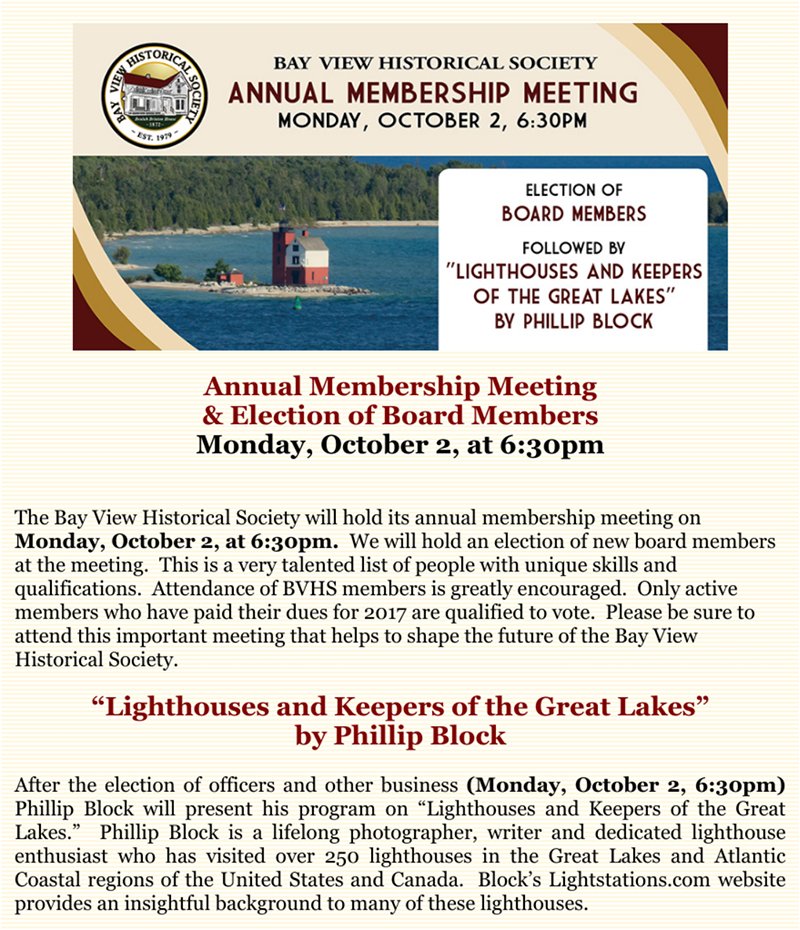 I also got a nice mention in the BVHS Historian, their newsletter: