The following article appeared in the November 6, 2019 edition of the Ozaukee Press.

An eye for lights of the lakes 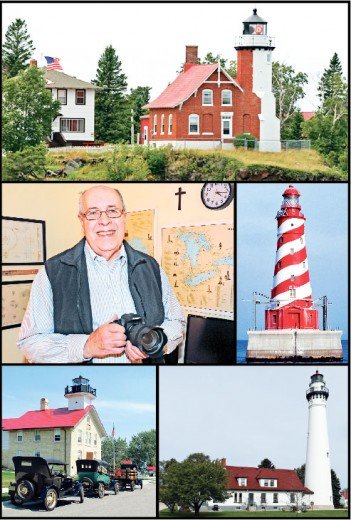 Phil Block (above left) has photographed more than 250 Great Lakes lighthouses, including his favorite, the one at Eagle Harbor, Mich. (top photo), and the striped White Shoal lighthouse at the approach to the Straits of Mackinac. The lighthouses in the lower photos are at Wind Point near Racine (right) and, of course, in Port Washington—the 1860 Light Station, which he photographed with vintage automobiles parked in front.

In high school in Berkley, MI, a Detroit suburb, a vision test showed he has a special skill.

His father bought a Montgomery Ward 35mm Rangefinder, and Block took it to Michigan Technological University in Houghton, Mich., with him.

“I shot my way through college with that thing,” he said. “I’ve been doing it as a hobby ever since.”

The hobby has led Block to interesting places, near and far. In the 1980s, he packed his camping gear into his Buick Regal and took a two-week vacation along the shore of Lake Superior.

He had an issue of the Daily Mining Gazette that told of 10 lighthouses in the Keweenaw Peninsula on Michigan’s Upper Peninsula near his alma mater.

“I started shooting lighthouses on that trip and found out that, number one, they’re beautiful,” he said, “but the real reason I do this is because it takes you to really, really nice places. I enjoy just being in these places.”

Block got more interested in the iconic structures as time went on.

“They offer a sense of security. People associate them with romance and adventure, but also danger because they warn of obstructions to navigation,” he said.

Block has photographed more than 250 lighthouses.

While at a party in a Milwaukee apartment during a lousy Green Bay Packers game, people began talking about photography. Block said he liked to shoot lighthouses and that he had slides.

Someone asked him to do a presentation for the sailing club of the University of Wisconsin-Milwaukee. 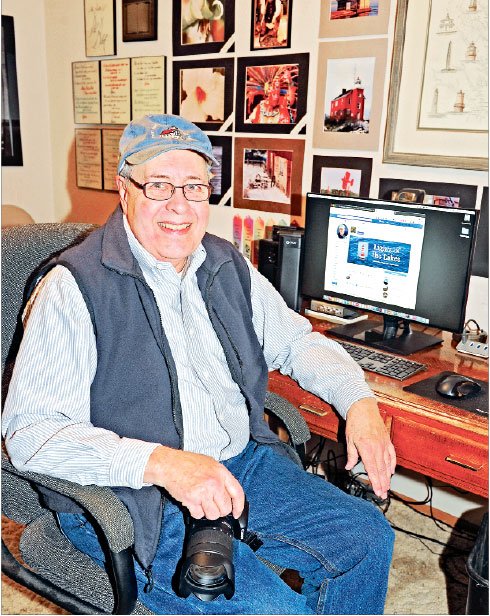 Years ago, Block’s photos were 35mm slides displayed with a Kodak carousel projector.

“I would have to stop halfway through and change the drum on the projector because there were more slides than could fit into one drum,” he said.

Block’s hour-long shows include photos of more than 60 Great Lakes lighthouses, as well as shipwrecks and mining and logging activities in the 19th and 20th centuries, complete with music and sound effects.

As an encore, Block presents a tribute to the Edmund Fitzgerald, the largest and most famous shipwreck on the Great Lakes. The 44-year anniversary of its sinking is Sunday.

Block is enamored with the ship’s story, recovery of its bell and attempts to recover the 29 bodies that have been thwarted by the Canadian government.

Block, who digitized the slides several years ago, has done about 175 presentations.

He tells people at his shows, “This is what happens when a hobby gets out of control,” he said.

Block loves the outdoors and has thousands of shots of wildflowers, nature, waterfalls, and old barns. He finds barns by looking for the white areas inside the green areas on old maps. Green represents forest while the white are farmed areas where the barns will be. He prefers structures made of natural materials.

“The more weathered the better,” he said.

Some barns he has found in the U.P. Others have been as close as Highway LL.

Online photography classes taught Block how to use light and take advantage of all of his cameras’ tools.

Block, 71, found time for photography around careers in business management, corporate training and technical communications that had him living in five different states and traveling to 44.

He got involved with website design when the industry was young, at one point running the Circus World Museum website, and he still operates several on his own.

He got into the habit of taking online courses when he was required by one job to take 30 classes in one year on his own time.

“I’m a lifelong learner,” he said.

He is a member of the 117-year-old Photo Pictorialists of Milwaukee.

When he’s not taking photos, Block is into 1960s music and has 13,000 pieces on a Linux desktop computer that wirelessly connects to speakers across the room at his home.

For those interested in trying photography, Block doesn’t suggest spending a fortune on equipment. He recommends taking some kind of training before taking photos.

“Then you just have to get out and practice. You’ve got to just get out there and do it,” he said.